GEOGRAPHY (Where I'd be on the map having started at my house in Salt Lake City, Utah, heading for Tokyo):
Pacific Ocean (431 miles off the West coast. I am heading for the Hawaiian Islands)

ATTENTION:
Don’t forget about Giveaway Tuesday coming up. You need to be a subscriber to be eligible for the drawing. Just leave a comment that day and I will throw your name in the drawing. We’ll draw out a name and announce the winner on Wednesday. This coming Tuesday, a local bike store that I go to, Highlander Bike, has been kind enough to donate the prize. Stay tuned for details on Tuesday.

TODAY:
Well, I finally did it. I had my first 100+ mile week. I will say that it hasn’t been the distance that’s been a challenge, but rather riding in the heat. I took advantage of a few mornings this week to ride early, which works well, but after work on my ride home, it’s cookin’!

I have noticed this week that my knees, especially my left knee has not been barking during normal activity. Usually, when climbing stairs, or getting up from a sitting position, my knees strain and I feel my weight on my joints. It’s been weird to get up out of bed, stand up and realize that the strain I once felt is gone! This is the wonderful result of having almost 50 pounds less weight bearing down on my joints, and of exercising my legs and knees through biking. I thought the strain on my joints was due to age. I’m sure there is an age variable there, but the strain has been primarily from all the weight.

Also, my stomach---yeah it’s still a bit chubby, is not protruding out as much as it used to. I actually noticed this week that physically my body is changing! Pants that we bought a few months ago, are already getting loose, shirts that used to be tight, look big on me now. I love the change, and my changing perspective on everything.

I climb a few small hills on my rides, and have noticed that they are easier to climb. Not as much huffing and puffing. But, I still cannot believe that in just over a year, I need to be able to bike a constant incline up into the mountains on the way to Mount Fuji for 5 hours, and then for 2 hours going up Mount Fuji herself at an average grade of 4-5%! Gee, that blows my mind. But, it will make a difference not having 155lbs on me when I do it! Again, I keep reminding myself that I don’t have to do this tomorrow…but I will the next day! ;)

Hey YOU out there that is reading this…Here’s something to think about if you’re a larger person. One of the positive things about carrying around so much weight is that you have muscle carrying that. Take a 200lbs man and give him 165lbs to put in his back pack to carry around, and I’ll bet he’ll struggle carrying that around 24/7. You on the other hand do something similar everyday. Yes, you struggle too, but your body has built muscle and stamina from doing that.

I was a pretty big guy (still am but a littler big guy ;)) But I just decided to initially get on my stationary bike and pedal for 30 minutes. When that got boring I started to jog. Then I got a knee injury from jogging. So my physical therapist told me to do what? Start pedaling for 60 minutes, back on my stationary bike. “How?” I thought. So I just started to do it because I wanted to rehab my knee. I was surprised that I had another 30 minutes in me, and was soon pedaling for 60 minutes! So, we big people, have what we need. Yes, it hurts, and it’s hard, but it’s worth it. There’s nothing more exciting than getting up out of bed and not feeling your knees strain! 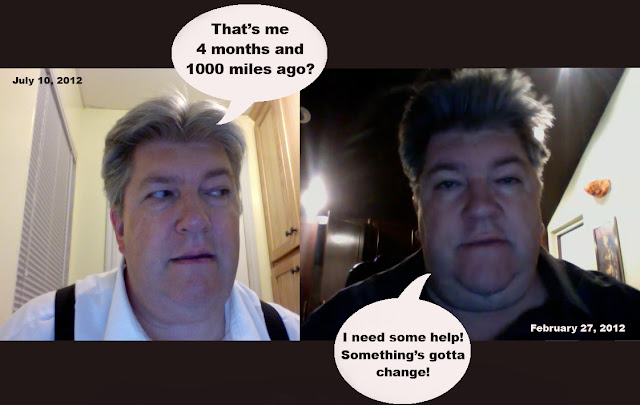 LEARNED:
So, I want to get serious with you for a moment and talk about what the time cost is to getting to where I am. I was chatting with my wife last night about the time it takes to ride. Most of the time it takes an hour with traffic lights, etc., to ride 10-12 miles. So if I’m logging in 20+ miles a day, I am investing 2+ hours a day in my health. I find myself all the time putting things off because I’m too busy to do this or do that. Isn’t it interesting that I’ve found an extra 2+ hours a day to bike/exercise? It really is true that we become what we focus on. I have been getting up more this week to go on 6am bike rides. That is where I am finding a little more time…the beautiful morning!

I am hoping that the time I put towards exercise right now, will buy me a little time on the tail end. I have probably shortened my life in some way by living an obese life for the past 25 years. I hope that I can get some of that time back. Our choices really do have consequences, and despite our late realizations, we still have to live with the consequences. So, I am hoping that by shifting my choices now, it will be better than not having shifted at all.

EATING:
Here is something interesting that happened to me this week. I’ve been taking some long bike rides. One day I was so hungry that I went and bought a 12” chicken sandwich on a big hard sour dough ambassador roll. I forgot to ask for a wheat roll. As I ate the sandwich, I thought, “Okay, I’m just going to eat 6 inches now, and eat the rest at another meal. This thing has got to be at least 1000 calories!” Well, I got back to work from my lunch break and was still hungry. I scarfed down the other 6 inches, and then felt guilty. After work I biked home 17 miles in the heat. When I got home, I jumped on the scale just for fun and had lost 2 pounds since the morning. Not only had I lost the weight, but I think that sandwich I was worried about burned up in to ash! I have discovered that with serious biking, not only can you lose weight, but you can lose guilt too!

I'd love to hear your comments

Don
Salt Lake City, UT, United States
I've been overweight for over 25 years. On February 29, 2012, I weighed in at 365lbs. I decided to do something about it. I trained for 18 months, lost over 90lbs, then flew to Japan and rode my bike from Tokyo to Mount FujiI, and then climbed to the top of the world-famous mountain. I thought that goal would be the end of my weight challenges. Nope! The journey continues. Follow along as I continue my adventure to 210 Again!