The other day I was thinking about what would happen if I injured myself during this challenge. Would it be the end of my challenge or would it pose another hurdle for me to work through? I guess that depends on the seriousness of the injury.

Well, last Saturday I decided to do something that I have never done in my 48 years of life...I went ice skating. It was a blast and I couldn't believe what I have been missing out on such a fun activity. As a family, we decided to go out last night to do some ice skating. We went to the Olympic Ice Skating Oval in Kearns, Utah. The first 90 minutes was great. I was telling my wife I really love the sensation of skating. Well, as I was rounding one of the corners, boom, before I knew it I was down! I remember hitting hard on my left wrist while trying to catch my fall and feeling some big pain! I saw my glasses fly across the floor and mt head hit the ice.

Well, I felt embarrassed to take such a spill, but even more as I tried to crawl off the ice with an injured wrist.

My wife suggested we head over to Instacare and see a doc. Within an hour I had been x-rayed and saw the broken bones in my wrist! Dang! DANG! They put a splint and sling on my left arm and I'll go see an orthopedist on Monday.

Am I over with the challenge? Heck NO! This is a small set back that will add some add some additional drama to this whole story. Ha ha.

I can still eat well, ride a stationary bike, and do my treadmill. I don't think I'll be riding my bike to work, etc., though for 4-6 weeks. Oh well, we'll make the best of it. 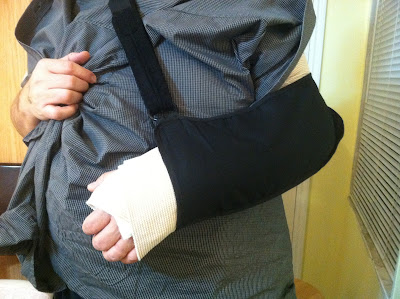 I'd love to hear your comments

Don
Salt Lake City, UT, United States
I've been overweight for over 25 years. On February 29, 2012, I weighed in at 365lbs. I decided to do something about it. I trained for 18 months, lost over 90lbs, then flew to Japan and rode my bike from Tokyo to Mount FujiI, and then climbed to the top of the world-famous mountain. I thought that goal would be the end of my weight challenges. Nope! The journey continues. Follow along as I continue my adventure to 210 Again!